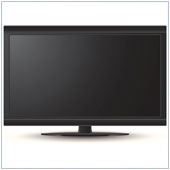 Businesses today rely heavily on technology on a daily basis. And regardless of the industry you’re involved in, an essential piece of hardware is the computer monitor, whether used at work or in the home. While computer monitors come in a variety of shapes, designs, and colors, did you know that they can also be categorized broadly into three different types based on the technology used to make them?

These monitors employ CRT technology, which was used most commonly in the manufacturing of television screens. With these monitors, a stream of intense high energy electrons is used to form images on a fluorescent screen. A cathode ray tube is basically a vacuum tube containing an electron gun at one end and a fluorescent screen at another end.

While CRT monitors can still be found in some organizations, many offices have stopped using them largely because they are heavy, bulky, and costly to replace should they break. While they are still in use, it would be a good idea to phase these monitors out for cheaper, lighter, and more reliable monitors.

The LCD monitor incorporates one of the most advanced technologies available today. Typically, it consists of a layer of color or monochrome pixels arranged schematically between a couple of transparent electrodes and two polarizing filters. Optical effect is made possible by polarizing the light in varied amounts and making it pass through the liquid crystal layer. The two types of LCD technology available are the active matrix of TFT and a passive matrix technology. TFT generates better picture quality and is more secure and reliable. Passive matrix, on the other hand, has a slow response time and is slowly becoming outdated.

The advantages of LCD monitors include their compact size which makes them lightweight. They also don’t consume much electricity as CRT monitors, and can be run off of batteries which makes them ideal for laptops.

Images transmitted by these monitors don’t get geometrically distorted and have little flicker. However, this type of monitor does have disadvantages, such as its relatively high price, an image quality which is not constant when viewed from different angles, and a monitor resolution that is not always constant, meaning any alterations can result in reduced performance.

LED monitors are the latest types of monitors on the market today. These are flat panel, or slightly curved displays which make use of light-emitting diodes for back-lighting, instead of cold cathode fluorescent (CCFL) back-lighting used in LCDs. LED monitors are said to use much lesser power than CRT and LCD and are considered far more environmentally friendly.

The advantages of LED monitors are that they produce images with higher contrast, have less negative environmental impact when disposed, are more durable than CRT or LCD monitors, and features a very thin design. They also don’t produce much heat while running. The only downside is that they can be more expensive, especially for the high-end monitors like the new curved displays that are being released.

Being aware of the different types of computer monitors available should help you choose one that’s most suited to your needs. Looking to learn more about hardware in today’s world? Contact us and see how we can help.